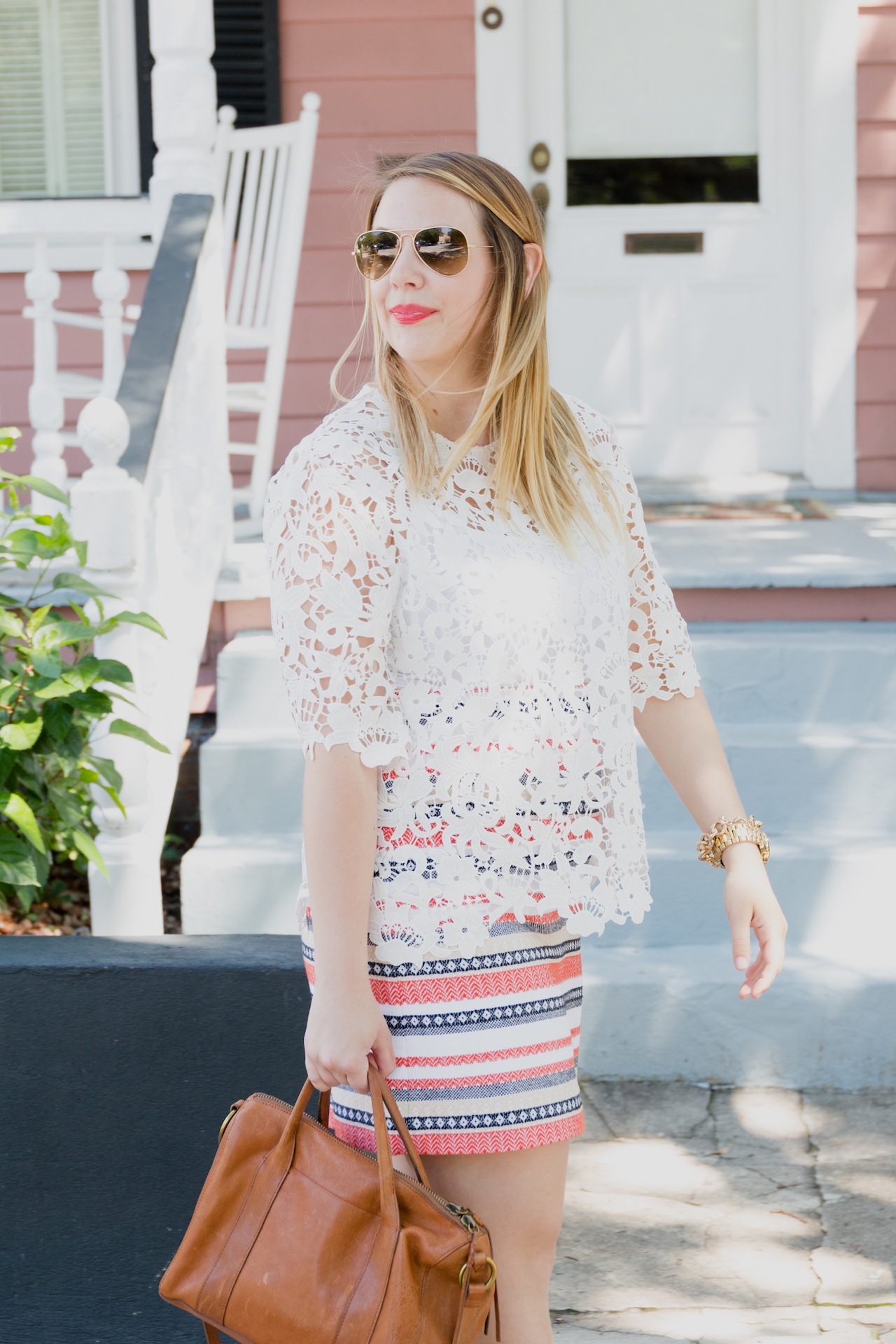 If you’ve been reading A Touch of Teal for a while, then you know I shoot a lot of the outfits seen on this blog with my friend Monica. We’ve been shooting together for nearly three years now, and have learned a lot along the way. For instance, there was one time we were shooting together, and every single photo we took was out of focus. Every single photo.

One thing we realized early on is that you look a lot more natural on camera when there’s motion involved. As such, we spend a large portion of our shoots walking. These simultaneously help prevent too many of our photos from having that senior-year-of-high-school-portrait vibe and, more often than not, give you a better idea of what an outfit actually wears like.

However, knowing that Monica and I once did a whole shoot where every photo was blurry, it should not surprise you that it took us a while to to master the art of consistently shooting in-focus walking shots. While we still have some blurry photos in the batch from time to time—that’s just the nature of shooting motion!—we have obtained the skills needed to shoot in-focus walking shots and I wanted to share some of our tricks of the trade with you today.

A couple of things to note. First, in this post, I describe Monica’s and my journey to perfecting the art of getting in-focus walking shots because she’s the person I learned most of these skills with. From time to time, I shoot with professional photographers and they know how to set up the shots already, so all I have to do is walk—but that doesn’t make for a very interesting post ;]. Second, before you read this post, I recommend reading my DSLR photography basics post and my photography tips and tricks post since I assumed knowledge of the topics discussed in those when writing this post. To get a good walking shot—or any shot really—it’s important to make sure your aperture, ISO, and shutter speed are set for the light conditions you’re in. I like shooting in manual and adjusting each of these individually as-needed so that I as much control over my shot as possible.

When Monica and I first started experimenting about what settings to use to get the perfect walking shot, we thought that we should use a quicker shutter speed to capture the motion. As such, we often shot at at least 1/500 and adjusted our aperture and ISO to keep the photos correctly exposed. We often dropped the aperture down to f/1.8, which is the lowest possible on the lenses we shoot with. That aperture is great for shooting detail shots, but for full body shots, it limits the depth of field so dramatically that very little of our photos were in focus, which isn’t ideal when you’re shooting an entire outfit. So while our photos were technically in focus, a large portion of the picture was blurred by the bokeh effect.

A little over a year ago, Monica and I took a photography lesson with Rosa, and we told her the number one thing we were struggling with were these walking shots. She asked us what settings we were using and we told her we we were using a fast shutter speed and adjusting the other settings as a result. She taught us that, instead, we should use the same settings for walking photos as we were for all the other photos in our shoot. We should only make minor adjustments during the shoot if the lighting changed—like if the sun goes behind a cloud, etc.

As such, at the beginning of all of our shoots now, Monica and I set up the light before we get started. Monica takes my photos on my camera, and I take her photos on her camera. So, when we’re setting up to shoot me, Monica “models” while I set up the light on my camera, and then once the light is good to go, I hand her my camera. Since she shoots with a Canon and I shoot with a Nikon, it’s just easier for us to set up our own light since we’re familiar with the menus. Once we have the light set up, we rarely touch it mid-shoot.

(A note that for the best photographs, whether or not you’re walking, it’s best to keep the shutter speed at 1/80 or higher unless you have a tripod!) 02. Be purposeful with your shots.

The reason that Monica and I can keep our camera settings the same throughout an entire shoot is that we’ve become really purposeful with our shots.

When we were less experienced, we basically paparazzi’d each other, aiming to take as many photos as possible. At one point, we used continuous shooting—a setting that allows you to hold down the button of the camera and it takes a burst of photos in succession—for entire shoots in hopes of getting several non-blurry photos where we also looked cute. Sure, it worked most of the time, but we wanted to be more in control of the photos we were taking and not have to sort through 500+ photos (of each outfit…) at the end of a shoot.

As such, we slowed things down and aimed to take less shots that were higher-quality. For walking shots, while going slower meant that while we may end up with less photos per walk, we gave the camera more time to autofocus, and thus, ended up with clearer photos. To make sure we have plenty of in-focus options, we often walk five or six times, and probably shoot between five to eight photos per walk, depending on how far apart from each other we are at the start.

In terms of the actual walking, we’re more purposeful with that, too. We’ve slowed down our walking speed and tend to make over-exaggerated movements. While this definitely gets us some weird looks from passerbys, the results are worth it. Even when we’re walking, Monica and I opt for Single-Point AF Area Mode instead of Dynamic Area AF Mode since we can predict where the subject is going next. We typically walk in a straight line, so it’s easy to have the camera follow us as we move.

As we’re walking, the person behind the camera strives to keep the red dot on the model’s face. As I explained in my photography tips and tricks post, this tells the camera where to focus. When we were more novice, we didn’t pay attention to this as much, so sometimes we’d have photos where our feet were super crisp and our faces weren’t as defined because the red dot was on our feet.

Now that we know to keep the red dot on the face, we’re much happier with the final results—and even if the whole photo isn’t in focus, if you’re face is, it’s still usable most of the time. That about covers it! As always, the number one thing I recommend to get better at photography is to just get out there and practice. I’m very lucky since Monica and I have had many opportunities to practice our skills together over the years, and have loved learning with a consistent shooting buddy. If you have any questions about this post or photography in general, feel free to drop me a note in the comments below and I’ll try my best to answer it.