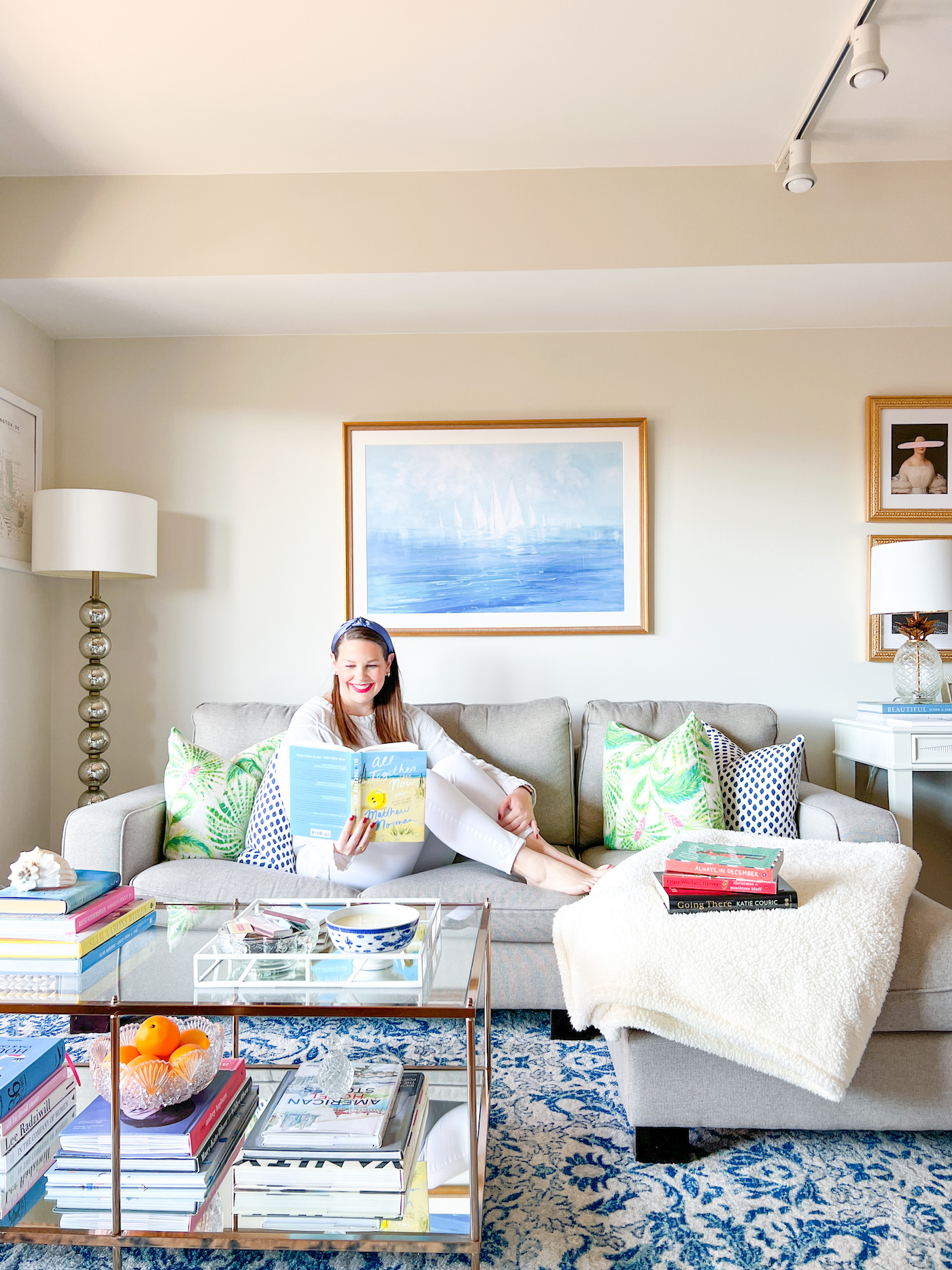 While 2021 certainly had its challenging moments, one bright spot for me, as it usually is, was reading. I’ve loved to read for as long as I can remember—even in elementary school, I would stay up late reading Nancy Drew or The Babysitters Club with a flashlight in my bed. Flash forward about twenty years, and I still read almost every night before bed—but I’ve upgraded from a flashlight to a Kindle.

I started keeping track of the number of books I read each year back in 2017, and setting a goal has helped me keep reading a priority in my life. While I used to increase the goal number of books I wanted to read each year, I’ve found a really sweet spot in the ~75 books per year range. If I try to read more than that, reading starts to feel like a chore and I have to sacrifice other things going on it my life in favor of reading—which I just don’t want to do! As much as I also love reading, I also love balance, which is why I am keeping my reading goal for 2022 the same as it was in 2021: 75 books.

I set my goal on Goodreads and it helps keep me accountable and tracks my progress for me—it will even tell me if I am behind, on-track, or ahead of meeting my goal. Feel free to follow me over there, too! And, if you’re curious about other books I’ve loved, you can see my past roundups of the best books I read each year here: 2020, 2019, 2018, 2017.

This year, I read so many amazing books and I am excited to share my picks with you today! It was hard to narrow it down to just ten books, but I think that’s a good problem to have. And before we dive in, one housekeeping note—the list below is representative of the best books I read in 2021, but that doesn’t mean they were all published in 2021. Some of these are older reads I just discovered, and some of them were published this year. I know some people separate their “best of” lists to create one for books that were published in prior years and one for books published this year, but I chose not to go that route.

10. All Together Now by Matthew Norman

A 35-year-old billionaire, Robbie, finds out he’s dying. So he invites his three oldest friends, Blair, Cat, and Wade, to Fenwick Island, Delaware for the weekend to tell them. Each character is struggling with something different in their lives when they arrive to the island, and it all comes out during the weekend they spend together—along with Robbie’s big news.

09. Everything After by Jill Santopolo

As a college kid, Emily had two passions: music and her boyfriend, Rob. Since then, Emily’s become a psychologist, helping students at NYU with transitions in their life. She’s married to Ezra, a doctor who has dedicated his life to helping children through terminal illness. They hope to have a child of their own and begin the journey of parenthood. But when Emily miscarries, she’s reminded of past trauma and suddenly begins to question everything in her life—including her purpose and who she’s meant to love.

08. Outliers: The Story of Success by Malcom Gladwell

The thesis of this book is that we have focused too much on successful people’s intelligence, ambition, and personality traits instead of looking at the world that surrounds the successful—their culture, their family, their generation, their upbringing. Along the way, Gladwell highlights why almost no star hockey players are born in the fall, why, when it comes to plane crashes, where pilots are born as much as it matters how well they are trained, and what Bill Gates and the Beatles have in common.

07. The Huntress by Kate Quinn

After WWII ends, a trio of Nazi hunters goes on a quest to bring “The Huntress” to justice for killing six Jewish children in cold blood. On the other side of the ocean, 17-year-old Jordan McBride is thrilled when her dad, a widower, brings home his new fiancée, Anna. But Jordan quickly becomes skeptical of her soft-spoken German stepmother, and begins snooping around to find out what Anna’s hiding.

06. The Lions of Fifth Avenue by Fiona Davis

The story is half told in 1913. Laura Lyons lives in an apartment at the New York Public Library with her young children and her husband, who is the superintendent of the building. She yearns for more out of life, so she applies to Columbia’s journalism school and is accepted. As she’s reporting all over the city, she’s drawn to the new age ideas being born in Greenwich Village. She hears about suffrage and women’s rights, and begins to question her role as a wife and mother. Concurrently, rare books begin to disappear from the library and her family falls under suspicion. When things come to a head, she’s forced to determine where her priorities really lie.

The other half of the story is told 80 years later, in 1993. Sadie lands her dream job as curator of the New York Public Library, but the job quickly becomes a nightmare as rare books begin to go missing. Determined to save her collections and her career, she teams up with the private investigator. But as she uncovers more information about the missing books, she’s forced to confront some unwelcome truths about her own family heritage—and the crisis at the library.

05. Thanks for Waiting by Doree Shafrir

Doree spent a lot of her time in her 20s and 30s feeling out of sync with her peers: she was an intern at 29 and didn’t meet her husband on Tinder until her late 30s, after most of her friends were on their second or third kid. After a long infertility struggle, she became a mom at 41. She now hosts the Forever 35 podcast, which I’ve actually never listened to—but now definitely will.

I loved how candid Doree was about how we feel pressure to hit certain milestones by a certain time—and if we don’t, we often feel like a failure, when in reality, we aren’t.

Eve, Justin, Susie, and Ed have been friends forever. Thursday night trivia is a can’t-miss event for the friend group, and one Thursday, Ed’s longtime girlfriend proposes to him. This sends Eve into a tailspin, as she’s been secretly in love with Ed for years. To try and ease the pain, she texts a casual hookup and ignores her BFF Susie’s texts.

The next morning, though, Ed calls her with horrible news: Susie was hit by a car on her walk home and passed away. In the aftermath, Eve’s whole world is upended—and she discovers secrets she wished weren’t true.

Augustus Everett is an acclaimed literary fiction writer, and January is best known for her chick lit best sellers. They have nothing in common, except that they’re living in houses next door to each other for the summer, both suffering from writer’s block. So they strike a deal: Augustus will write a romance novel and January will write an intense work of literary fiction, and whoever sells the most books, wins.

02. Before We Were Strangers by Renee Carlino

Grace and Matty meet as college kids at NYU and have a whirlwind romance. The book opens fifteen years later when the two are in their mid-30s. Matty is going through a terrible divorce; his ex-wife is pregnant and now married to their mutual coworker. One day, Matty sees Grace on a subway car that departs before he can get to her. He decides to put up a Craigslist ‘Missed Connections’ post to find her. The book then flashes back in time to tell the story of how they fell in love—and where it all fell apart.

This book tells the story of Philadelphia’s opioid crisis through the story of two sisters, Mickey and Kacey. Inseparable as children, Kacey fell into drugs as a teenager and drifted apart from her sister. They no longer talk, but Mickey keeps an eye on Kacey through her police beat—she’s assigned to the very neighborhood Kacey often sells and uses in.

Mickey realizes her sister seems to have disappeared as she hasn’t been working the streets in several months. Around the same time, a series of mysterious murders happens in the same neighborhood. Mickey becomes obsessed with finding her sister—and the murderer—before it’s too late.