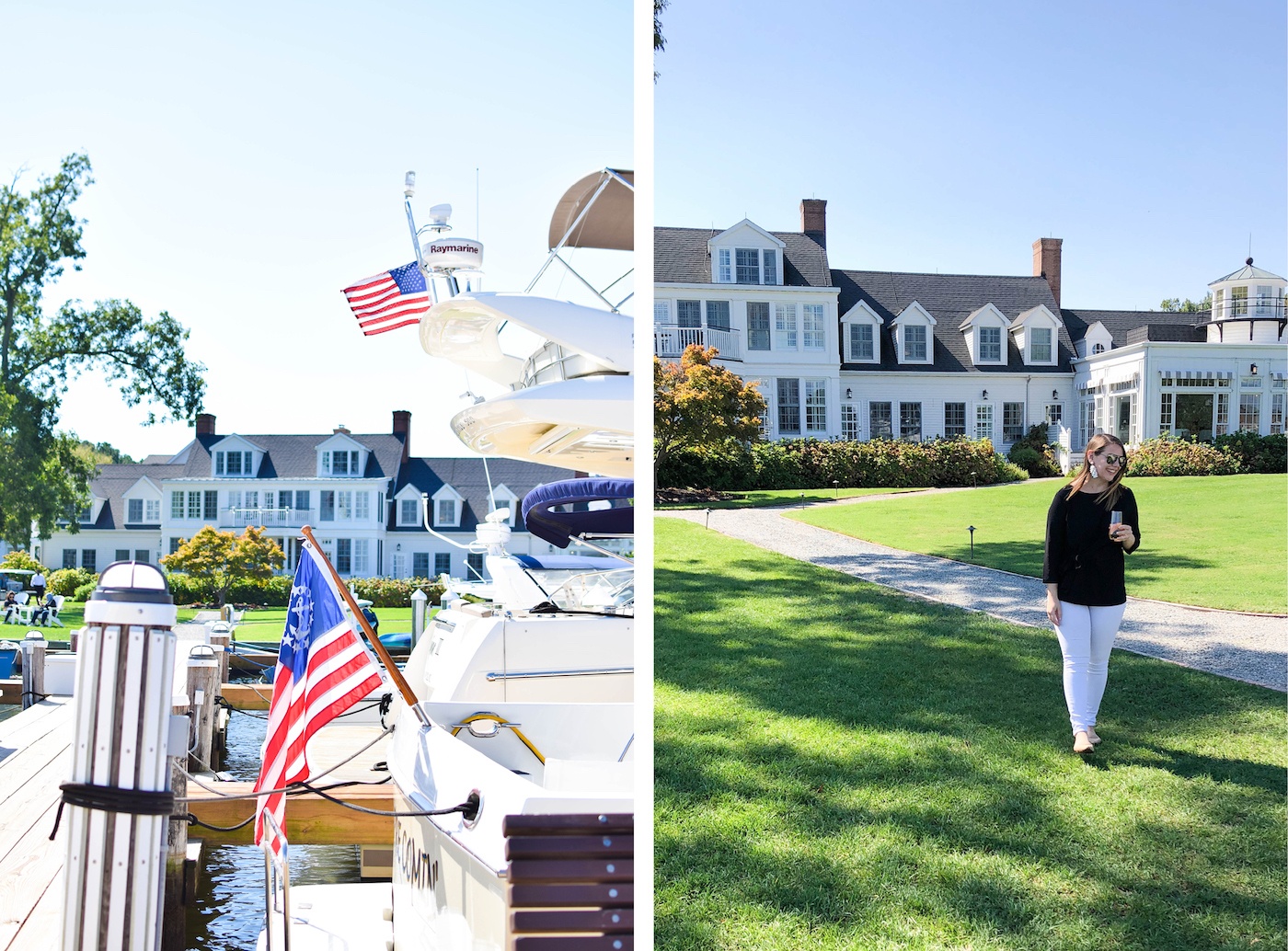 I hope everyone had a nice weekend! My weekend was awesome—I had a fun girls weekend in Maryland with Monica and her college friend Kim, who I’ve gotten to know over the last few months. We all hit it off at a happy hour a couple months ago and decided to get a weekend trip on the calendar. After tossing around a few locations, we settled on St. Michaels, Maryland, since it was on the water and easy to get to from the DC area. Even though I’ve spent some time on the Eastern Shore of Maryland before, I’d never been to St. Michaels, so was excited to explore this coastal town on the Chesapeake Bay.

I’ll be honest that on Friday, I was feeling super tired and stressed and not necessarily in the mood to head out of town. However, those sentiments quickly dissipated and I realized a fun girls weekend full of eating and drinking our way through town was just what the doctor ordered. We spent Friday night in Annapolis since Kim’s parents live there. If you’ve been reading here for a while, you know Monica and I went to Annapolis together a few years ago—I hadn’t been back since, so I was very excited to get back there, too. We split pizzas and wine at Vin 909, a winécafe—aka my kind of café—in the Eastport neighborhood of Annapolis. After, we had a nightcap at Pusser’s, which is one of my favorite bars in town since it’s back patio is on the water.

Before I break down where to stay, where to eat, and what to do, a note that there isn’t really an Uber or cab company presence in St. Michaels, so having a car is a necessity in order to get to town and then for getting around once you’re there—unless you have a boat, hah! We initially had looked into staying at The Inn at Perry Cabin, but they had a minimum three night stay that would have run us over $1,000 and we didn’t want our low-key girls weekend to start entering rent money territory. Most of the other hotels in St. Michaels were either booked up or bed-and-breakfasts that were mostly set up to sleep two people, not three.

So, we actually stayed on nearby Tilghman Island at the Wylder Hotel. It was about twenty minutes south on the peninsula from St. Michaels, and a cute place in its own right! We stayed in a two-bed bungalow just a few steps away from the main hotel. The property was recently renovated after being closed for some time and re-opened in April 2018—they’ve done a great job with the place, and even though there are a few things we wish were a little more kept up, I’m sure it’ll get better with time. Overall, we enjoyed our stay and found that the website did a really good job of accurately depicting the hotel and its grounds—I would definitely stay there again.

Wylder Hotel felt like an adult summer camp—things were pretty simple, but clean, and there is no shortage of activities on the grounds. Out front are complimentary bikes you can use to explore the island and out back are kayaks you can take out on the water—Monica and Kim took advantage of both while I slept in. There’s also a salt water pool, yard games, and a fire pit—we sat out by the latter on Saturday night with a $10 s’mores kit we purchased from the hotel, which was such a brilliant idea on the hotel’s part. The hotel offers a complimentary continental breakfast and two restaurants on site—Bar Mumbo and Tickler’s Crab Shack. We ate at the latter for dinner on Saturday night since it had a great back patio right on the water.

We booked Wylder Hotel through Expedia, however, if you can, I recommend booking directly with the hotel. We had a lot of confusion at check-out regarding resort fees and room taxes that probably would have been avoided if we had booked on Wylder Hotel’s website. We certainly did not go hungry on our trip to St. Michaels! Since we had quite a sizable Saturday brunch at Iron Rooster in Annapolis, we opted for a late afternoon snack instead of lunch. We grabbed several plates to share at Awful Arthurs on Talbot Street, which is the main street where lots of restaurants and shops are in St. Michaels. We split the lobster mac and cheese and crab dip—both of which hit the spot on our seafood craving.

For dinner on Saturday night, we ate at Ticker’s Crab Shack at the Wylder Hotel as opposed to going back to St. Michaels since we didn’t want to have to worry about drinking and driving. We all ordered the burger with fries, and it was delicious. I also ordered a margarita, and found their cocktails to be really well made! While we sat outside, there’s also an indoor portion of the restaurant that had the cutest bar stools / decor, which would have been great for a chillier or rainy night.

On Sunday morning, we stopped by Two if By Sea, a cute diner almost right across the street from the Wylder Hotel to grab a heartier meal before hitting the road. Monica ordered pancakes that looked delicious, Kim got an omelette, and I opted for a cobb salad since it was the point in the trip that my body was really craving greens!

Other places we had looked at eating at in St. Michaels were Theo’s Steakhouse, Ava’s Pizza, Limoncello Italian, and Bistro St. Michaels. On my next trip to town, I’d also love to hit up the the St. Michaels Winery and Eastern Shore Brewing right next door. Once we arrived in St. Michaels, the first thing we did was walk around Talbot Street, which, as I mentioned, is the main drag in town. There are so many cute boutiques that we popped in and out of, but a few favorites:

After we were done shopping, we walked over to The Inn at Perry Cabin, which is a beautiful historic hotel right on the water. We grabbed a drink at their Purser’s Pub and took it outside with us to sit in the adirondack chairs and watch the boats go by. While we were out there, we befriended the dock master, Jason, who invited us on the resort’s private yacht that can be chartered and also runs a weekend shuttle between the hotel and Annapolis—it’ll pick you up in Annapolis on Friday night and return you on Sunday afternoon so you can skip the weekend traffic. The boat was beautiful, and it was cool to see it up close. One day, I’d love to stay at the resort, hit up the spa, and have a meal at their Stars Terrace Restaurant!

The highlight of our trip for me was the sunset champagne cruise we took on the Lady Patty. We set sail from the Knapps Narrows Marina on Tilghman Island at 5:30pm and spent a little over two hours out on the Chesapeake Bay. The boat is an offshore racing boat originally built in 1935 that has been beautifully kept up. Our Captain and his first mate provided awesome service, and since it was a smooth night at sea, we were able to get up and move around the boat as we pleased. I ordered a margarita to enjoy, and it was one of the best I’ve ever had—it was made with fresh lime and clementine juice, which I think were the key ingredients! Halfway through the sail, they brought out complimentary champagne, which we enjoyed refills on for the duration of the trip. We enjoyed beautiful views of the sunset while learning a lot about the local geography. We also got to know most other patrons on the boat—there were 11 of us in total—and most folks were also from DC, so we had a lot to talk about. I am so glad we took this sail and would definitely recommend it if you’re in town. With fees, our cruise was only $54, which I think is a steal given the complimentary champagne. They also offer sails earlier in the day which are more family-friendly if that’s what you’re looking for. I absolutely LOVED my weekend in St. Michaels, Maryland, and can’t wait to get back sooner rather than later. Even though I’ve lived in the Chesapeake Bay watershed since I was eight, I haven’t spent nearly enough time on the Bay, and this weekend really inspired me to find other coastal towns on its waters to explore! 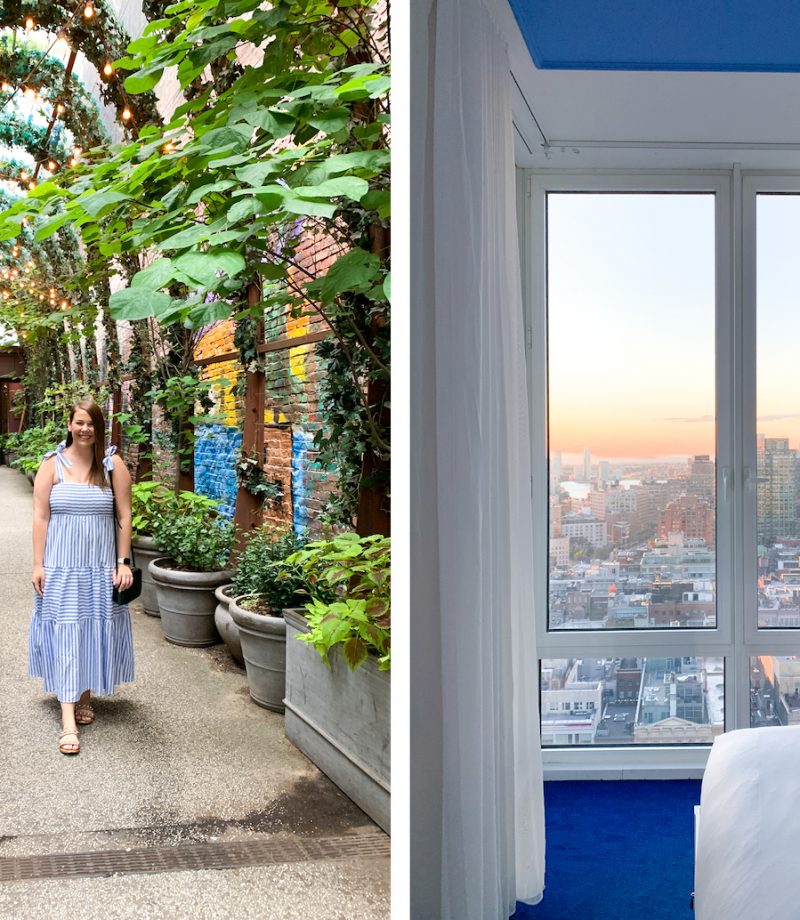