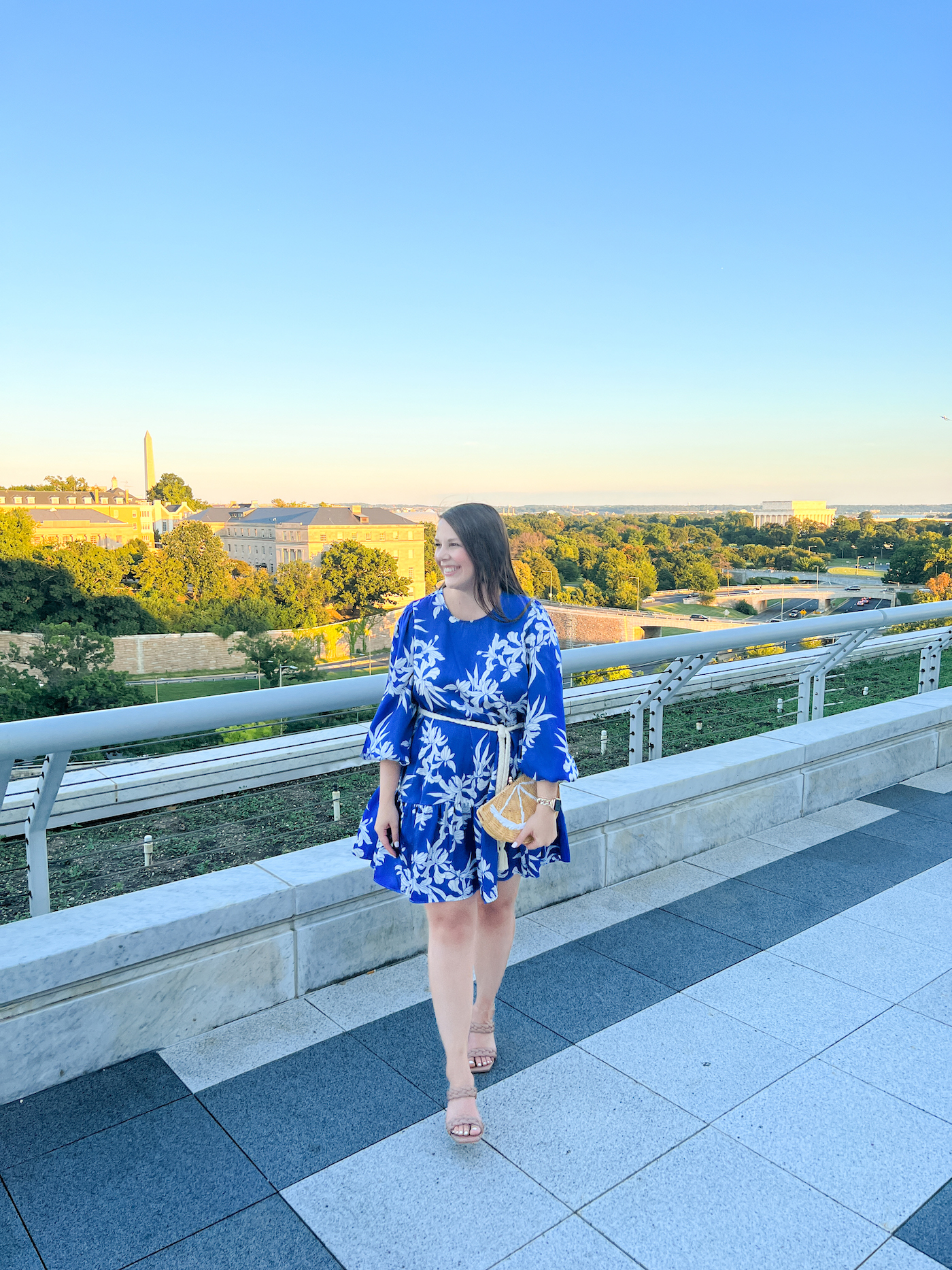 I cannot believe it is mid-September—it feels like just last week I was returning from my trip to Charleston over New Years Eve and planning for the year ahead. This year has absolutely flown by—and I was further reminded of that several times this week when the air had a noticeable chill to it in the mornings, especially compared to the oppressive heat and humidity of a DC August. I quite enjoy fall and the holiday season—but I wish we could skip the dreary months of January through March, when the days are cold and short and dark. Alas, one day I’ll be a snowbird and be able to fly down South for the winter.

Since fall is a busy season for me at work, I’ve been making sure I am prioritizing myself outside of work when I can. For the first time in years, I didn’t take a trip over Labor Day Weekend, and it was so nice to be in town and have a few lazy days at home. I was able to clean out my closet, clean my apartment, and spend time with family and friends. Since we all had the day off work, on Monday, my family and I even went out to Harpers Ferry, West Virginia to float the Shenandoah River—it was a relaxing way to cap off a great summer. I’ve also realized that as I’ve gotten older, it’s imperative for me to not over-schedule myself during the week—for the most part, I like to keep my Monday through Wednesday free of social plans so I can prioritize working out, eating healthy, and working on personal projects or hobbies after work. I seriously do not know how I used to keep such a busy schedule before the pandemic! In late August, my sisters and I went to see SIX, which is a modern retelling of the six wives of Henry VIII. My coworker saw the show earlier this summer and highly recommended it, so I was excited to see it as I love the opportunity to see live theater. An 80-minute show with no intermission, it was amazing from start to finish—the music, the costumes, and the stage presence of each of the wives was so good. I haven’t stopped listening to the soundtrack since I got home, and if it tours in your city or you’re able to see it in NYC on Broadway, I can’t recommend it enough.

In fact, I loved it so much that I saw it for a second time while it was in DC with my friend Kristyn—she heard me raving about it and asked if I wanted to see it again with her. I said yes in a heartbeat, and can confirm, it was just as good a second time! RETURNING TO THE OFFICE —

909 days after being sent home from work for “a few weeks” at the onset of the Covid pandemic, we returned to the office for a new hybrid model. The past couple of weeks, I’ve been going into the office on Tuesdays and Wednesdays—and while it’s been great to see people in-person again, it has been quite the adjustment. Our office is an open floor plan, and since I live and work from home alone, it’s been hard to focus on work with lots of chatter and movement throughout the day from coworkers. But on the flip side, it’s so much easier to get a quick answer to a question or brainstorm quickly together on a fire drill that popped up. Whenever I’ve returned home from the office, I’m always so drained because it requires being “on” in a different way, but like all things in life, I am sure it will get easier as I adjust to this new routine. I will say, I have really enjoyed getting dressed to go to work—it makes me feel really pulled together and confident, and who doesn’t love an excuse to shop for new clothes?! 😉

In my adult life, I’ve always taken the Metro to work. When I was at my first job out of school, I either lived within three Metro stops or could walk to work, and didn’t want to pay the $120/month to park at the office. Then, when I moved to Dupont Circle, I didn’t have a car, so Metro was the only option. Since returning to the office, I’ve been driving and it honestly feels a little luxurious compared to having to Metro—I don’t have to worry about the elements as much and I don’t have to carry a huge + heavy tote bag for very long. Since my office is in the opposite direction of traffic, it makes for a rather pleasant, and quick, drive. I usually listen to some pump-up music while I am drinking my green smoothie on the way to work, and then on the way home, I either listen to a podcast or call my mom. Since I live close to a Metro station, I could easily take the train into work, too, which I will probably do if I have a happy hour or plans in DC after work, but it’s really nice to have the option. And to top it off, parking at our office is free. HAMILTON AT THE KENNEDY CENTER —

My sister Jennifer and I first saw Hamilton at The Kennedy Center back in 2018, and loved every minute of it. Tickets back then were super expensive—we paid $450+ for balcony seats through a resale vendor. (Funny backstory there is that I convinced Jennifer to go with me after we got somewhat tipsy at a Jimmy Buffett concert—we appreciate both high and low brow arts.)

In 2020, Hamilton was set to return to The Kennedy Center, and Jennifer and I wanted to introduce Lindsey to one of our favorite musicals firsthand. We were able to buy tickets at face value when they went on sale, meaning they were so much more affordable than our first time seeing it. While we were initially optimistic that the pandemic would be subsided by the late August date we were supposed to see the show, unsurprisingly, it was eventually cancelled. We were bummed, but one upside was that Lin Manuel Miranda did release Hamilton on Disney+ that summer—so we were able to see Hamilton, just not in the way we originally intended.

Earlier this year, I was targeted an ad on Instagram that let me know Hamilton was set to return to The Kennedy Center, so when tickets went on sale, we jumped at the opportunity—and kept our fingers crossed that the show would go on this time. Luckily, it did and we were able to see Hamilton together a few Fridays ago. It was just as good live as I remember it, and I think I appreciated it much more this time since I knew so many more of the songs and was familiar with the plot. Prior to the show, we enjoyed a glass of bubbly on The Kennedy Center rooftop, which offers stunning views of the DC monuments and Georgetown. We also took a lap through the gift shop after the performance where I was able to pick up the most beautiful Jackie Kennedy Onassis watercolor notecards! Last week, I went to see The Lady Gang on tour at DC’s Sixth & I—it was so much fun. If you’re unfamiliar, Lady Gang is a podcast with new episodes twice a week that has long been one of my favorites—the hosts, Becca, Keltie, and Jackie, share weekly updates from their lives, interview guests across the pop culture spectrum, and dish out at advice. They’re on tour to promote their second book, Lady Secrets, which comes out on September 20.

Part of my day job is influencer marketing for Capital One, and we had the pleasure of working with Becca last year on a campaign. My coworker, Bridgette, and I really bonded with her and so when we found out one of the Lady Gang’s tour stops was DC, it was a no-brainer for us to make a night out of it! Following the show—which was hilarious—we grabbed a nightcap at a nearby bar. I haven’t had a wild Thursday like that in a while and have no regrets. I’ve written about this project before, but it’s one I recently picked back up so I wanted to share again. In early 2021, I bought a photo scanner in an effort to digitize my family’s photo archives. While we used Legacy Box to digitize our home videos, which I can’t recommend enough, getting photos done, especially for the amount of photos we have, was going to be so expensive. I love looking through old photos and I love organizational projects, so this was something I was willing to take on myself with a $100 scanner. I am not exaggerating when I say this project will take years, but to me, it will be worth it in the end—and, it’s a mindless task I can do at night while watching TV instead of browsing on my phone.

My family didn’t keep our photos super organized, so I’ve mostly been working my way through random photo albums or boxes of photos, and then trying to organize them digitally. I store them on Dropbox, and try to organize the photos first by year, and then by event. I am also trying to label who all is in the photo. My dad passed along a bunch of photos from my childhood he received from my Nana when she passed away, and on the back of each photo, she labeled who all was in the photo to correspond with their location in the photo, along with the location and the year. It was such a poignant reminder of how much she loved us, it really moved me.