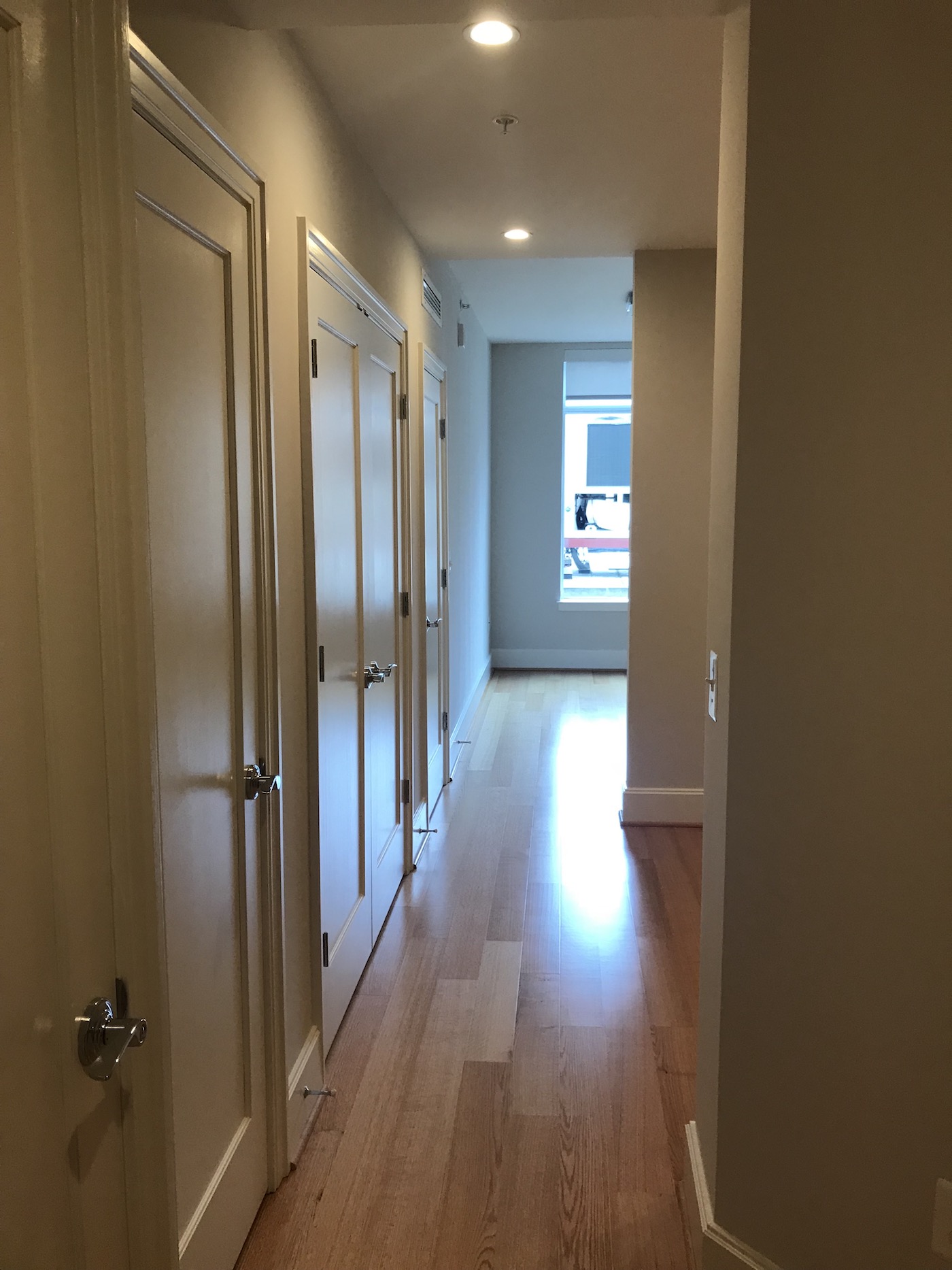 What’s up, squad! I’ve been MIA because I moved to Dupont Circle in Washington, DC last weekend. I pretty much packed up my whole apartment Labor Day Weekend, and then last Thursday, loaded up my car with my clothes and a few items that were too delicate to have the movers move for me. I left work a little bit early on Friday to pick up my keys (the picture above is the first one I took of my new place!), carried that load into my apartment (which took so many trips—what a workout!), made a Target run, and then took another load over to the new place. After that, I called it a night and got ready for the big day!

When I toured the apartment back in July, I was surprised because the leasing team showed me the unit that I was actually going to be leasing, which hasn’t been typical of past tours—they usually just show me the model. The person who lived in my apartment prior kept a very dirty and messy apartment (the white sink had turned a rust color), so I was a bit nervous the apartment wasn’t going to be delivered to me in the condition of the model unit. When I got my keys, the apartment was so clean it could have been brand new. That was such a big sigh of relief!

On moving day, my mom came over around 9am, and the movers showed up at 9:30am, right on time. For those of you that are local, I used Anytime Movers for the second year in a row, and could not recommend them enough. When the movers arrived, they began carefully wrapping all my artwork, my vintage green dresser, and all my glass furniture. While they were doing that, I went down to the building concierge to see how we could work the freight elevator. She let me know it was broken and that they were looking for the head of maintenance. He had it working for a few minutes, but the elevator kept shutting off despite being reset several times. This was extremely stressful in the moment because my apartment was right next to the freight elevator, and the normal elevators were down the hall. The normal elevators led to the parking garage instead of the loading dock, and to access the loading dock from the parking garage, it was a long walk that would have required several key fob swipes. Luckily, the property manager offered to turn one of the normal elevators into a freight elevator for me (so you can hold it on a floor and load it up before telling it to go up/down) and the head of maintenance suggested using an alternate exit that didn’t require the long walk through the parking garage. The snafu probably added an extra hour or two of time to my move, but the movers rolled with it and told us this happens all the time at apartment buildings.

The unloading at my new apartment went off without a hitch, and we were able to get everything in before the afternoon storms rolled in—we were really lucky in that regard! I also had Verizon come and set up my Internet that afternoon so I wasn’t without wifi at all, which was nice. Since the move took longer than expected, the Verizon guy actually showed up while the movers were still hard at work, and he ended up having to shut himself in my linen closet and work with the flashlight off his phone so as to not interfere with the movers. He was the real MVP, haha!

I had some of my best friends over for wine on Saturday night, which was a great way to relax after a very stressful move. By Sunday night, I had all the boxes out of my apartment, which really helped me feel settled right away. I’m having someone come and help me hang all my art next weekend. I hung most of it myself in my last apartment, and ended up putting a ton of unnecessary holes in my wall because I lack the patience to measure and do it the right way the first time—so I decided it’d be best to just have a professional do it. I found an interior designer on Thumbtack to do the job, and I’m excited to get her take on where to put each piece.

On the night I got my keys, I took a few measurements of the apartment to make sure all my furniture would fit. Since I was moving from an 800 SF true one bedroom to a 400 SF junior one-bed (essentially a studio with a separate sleeping area—mine has three walls, but no door), I knew I would have to downsize and had been purging, donating, and selling accordingly. Based on my measurements, I realized that both my TV stand and coffee table were not going to fit, and decided that I should keep the coffee table because I could mount the TV. A few days ago, I bought a new 50″ TV to better fit the wall—my old 22″ was going to be too small for the space and no longer stays connected to the wifi as well, which is very important now, since I cut cable when I moved. I have someone coming to mount it next weekend, too. I’ll let you know how it goes!

Once those two projects are done, I think I will be all settled here—I’ll shoot some photos of the space then! It will look very familiar since it has all of my things, but the new layout is perfect for one person and I know I’m going to be really happy here. I am excited to start exploring the neighborhood!

This weekend, I am heading to a wedding at The Jefferson Hotel in Richmond which I am so excited for! If you’ve been reading for a while, you may remember that I spent a weekend at The Jefferson last fall—it truly is one the best hotels I’ve ever been to and I am excited to get back down there because I know they are going to do this wedding up right.

I actually met the bride and groom at spin class about a year ago, and was super honored / surprised to be invited to their big day! I’ve met such a wonderful community through my exercise classes, and if you’re a 20-something looking for a way to make friends, I can’t recommend finding an exercise class  you love, and then hitting it up regularly at the same class time. Because I always went to the 6:30pm Monday night spin class like the bride and groom, we eventually struck up a conversation, and eventually became friends. People are creatures of habit!

One last thing for you DC locals, I wanted to tell you about two cool events I am going to soon—the first is Reese Witherspoon’s Whiskey in a Teacup Tour next Saturday (9/22) at the Anthem. Monica found this event, and we were able to snag tickets pretty early on to get a good deal. There are still tickets available in the $120-165 range if you want to splurge! The second is the Betches When’s Happy Hour? book tour stop at Sixth & I on Thursday, October 25. The three co-founders of Betches Media will be there, and I am most excited to see Jordana Abraham—she co-hosts the U Up podcast, which is my favorite one to listen to every week! When’s Happy Hour is a career-focused book, so I’m also excited to hear their advice!